Help! Why can't I reproduce a domain from exact coordinates?

I have been trying and failing to reproduce a domain from the RACMO group over Antarctica as shown here: 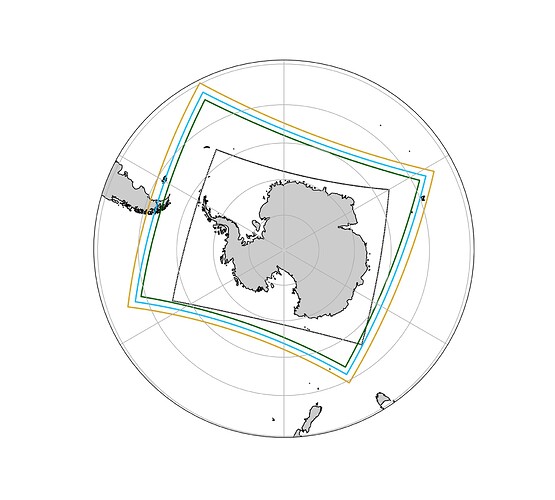 I managed to create it in Lampos on pumatest (by the way, is lampos available anywhere on pumanew? How can I run it if so?) using the coordinates specified below:

You can see the results here: 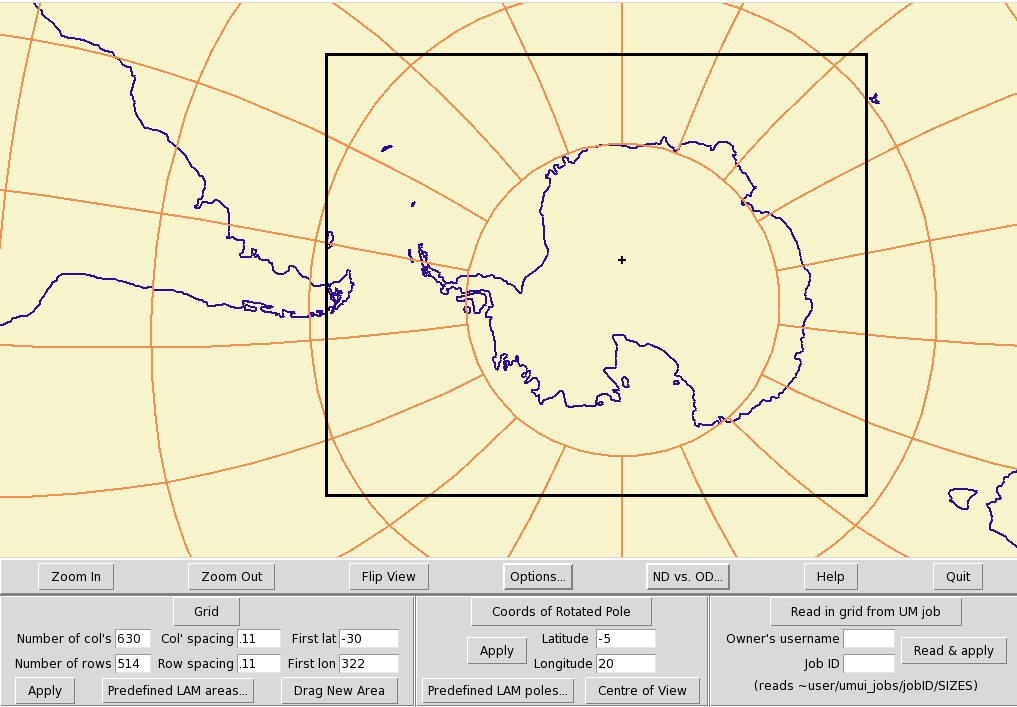 There are a couple of differences between RACMO and the UM: 1) RACMO specifies longitudes as -180 to +180 instead of the 0-360 in the UM. 2) RACMO’s pole latitude for this domain is -175, which is obviously unphysical and is their way of forcing the domain centre to be at -85. Given that the UM rotation works by rotating lats by 90 degrees relative to the domain centre and leaves lons alone, I would’ve thought that in UM notation this should be written as 5, 20. However, as you can see in the above image, I could only force the domain to be in the southern hemisphere by setting the pole lat to -5.

There are also some differences between the coordinates in the image and the ones I’m using because I was originally going for 0.11 degree, and am now using 0.1, plus lampos only accepts whole numbers.

After I adapt the inputs given these two things and put them into the suite to generate ancils, the domain is shifted very slightly to the right, such that it includes Macquarie island, which is outside the right-most boundary in the image and doesn’t include enough of the South American continent. The rounding to whole numbers between lampos/the suite also doesn’t really explain the differences I’m seeing.

It’s driving me up the wall because I can’t figure out why this might be happening! Has the rotation routine changed since vn4.5? I’m also struggling to get my head around how the rotation works when you’re specifying the BLC instead of domain centre. Do I need to adjust my BLC somehow?

If anyone can help me out of my misery I will be most grateful.

I’m not sure what vn4.5 is referring to?
I needed to adding 180 to the longitude in your LAMPOS settings to get the CAP to produce the correct coordinates – the mask was rubbish. But, don’t we already know this?

Thanks for your response Grenville.

Yes, we know CAP is rubbish but I can’t produce the ancils via the n2560 route either as it is because CAP or no CAP I can’t figure out how to get my suite to put the domain in the right place. Does that make sense?

the vn4.5 refers to lampos (am I right in thinking this was also the way it worked in the UM at vn4.5 too?) - thanks for the link!

And to clarify, you just added 180 to the lons to get this to work?

I thought I’d seen a mask of yours over antarctica? (You can supply your own mask to the CAP) 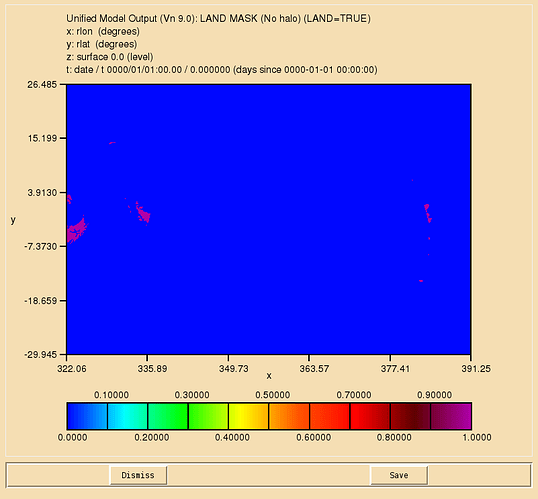 So you’re using the following:

I have managed to make a mask over Antarctica, but it wasn’t this precise domain (it didn’t have the right tilt). Basically I can only get it to produce something over Antarctica if I specify the centre of the domain, i.e. rg01_use_centre=True. But if I do that, I can’t get the jaunty angle we’re after. Hence why I’m trying to get my head around the BLC method (and failing!)

Thanks for your help Grenville

It did indeed, but I have been using the RAS (u-cq149) to produce ancillaries based on ANTS. I’m actually still having problems in the Arctic because the landfrac and potentially smow ancils it produces are still looking weird, but these don’t seem to be a problem in the Antarctic…

This topic was automatically closed 2 days after the last reply. New replies are no longer allowed.