I was following Patrick McGuire’s tutorial on running JULES at N flux sites:

Tutorial for setting up Rose/Cylc in order to run JULES on CEDA JASMIN - Land...

While the test queue ran (–partition=test), when you use constraint=“ivybridge128G” none of the jobs would launch. I am now testing using constraint=“intel” following the information on this page (LOTUS cluster specification - JASMIN help docs).

Patrick has updated his tutorial but I am noting it here in case there is alternative advice (…?) or in case others run into the same issue.

Martin, it sounds like you have this under control (intel should be good).
The only point I’d add is that if you are doing development work on the code, and want to compare to the KGO, then picking

would be a good idea. skylake348G is the choice in the trunk.
Similarly if you want to make runs which are bitwise reproducible, then picking a single named model of processor (such as this one) would be the thing to do

Thanks Dave, OK I can test that.

I did just test the --constraint=“intel” and now fcm_make doesn’t seem to be building the executable, I get a series of errors implying the necessary modules were not loaded:

I can’t immediately see the issue as this worked last week and the load cmds are there in ./site/suite.rc.CEDA_JASMIN?

Any thoughts would be appreciated.

It’s possible that there are problems with JASMIN: the system is ‘at risk’ from today until the 24th. If things are only working intermittently then this may be the reason:
https://www.ceda.ac.uk/blog/jasmin-reminder-of-maintenance-work-on-weekend-of-1819-june-and-extended-at-risk-period-20-24-june-1/

As for recommended set up - I think that you are close to what is on the trunk:

and this definitely worked for the last release. Copying the trunk is normally good.

You should be able to load modules from the sci or cylc nodes, for example, as a test. If the system is undergoing major testing then perhaps today is a bad day…

Hi Martin
Yes, I emailed JASMIN support about the modules not getting loaded today on cylc1. They responded that it was due to the maintenance that DaveC was talking about in his response to you here. The maintenance could go on for the rest of this week.
Patrick

Hi Martin:
It looks like module load is working today on cylc1.
Patrick

I had another go, some of the jobs seem to be running but a lot are crashing, not sure if this is still related to the previous issues?

A NODE FAILURE is a hardware problem. Please try again. If the problem persists, please inform the JASMIN helpdesk and seek their advice.

Hi Martin:
As Grenville suggests, yes, do please try again. Furthermore, JASMIN was under maintenance last week, so there might have been a few more node failures than normal. But node failures do happen.

If you want to try again, one way to do it is to re-open the Cylc GUI if it isn’t open already, with rose sgc. Then you can right click on each of the failed JULES tasks for the FLUXNET sites, and retrigger that task from the drop-down menu. There’re probably other ways to do this, but this is the most straightforward way. You can also look at the job.err and job.out and job.activity files (etc.) from this drop-down menu.

Thanks Grenville, I tried the suggestion from Patrick to manually trigger the jobs that failed and that worked, so it doesn’t seem to be an issue anymore. I can still report the error (I saved it) if folks think that is helpful.

However Patrick, I wasn’t able to trigger the plotting step (I tried a couple of times). Unfortunately, when I attempted to open the error message to see what the issue was it won’t display anything, I’ve attached a screenshot. Perhaps I can see the log via the cmd line, just not sure where to look…? 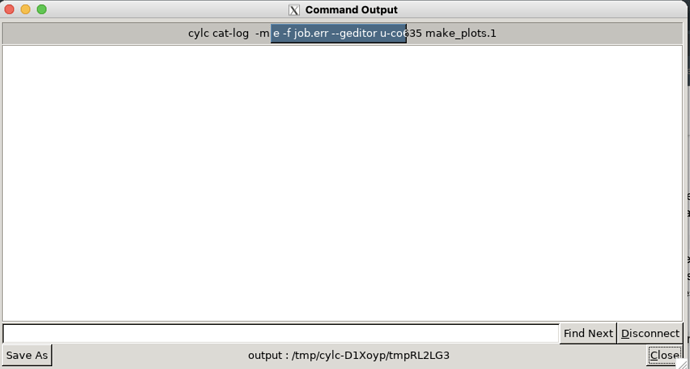 Hi Martin:
I am glad the jules runs completed for the FLUXNET suite!

If you’re having trouble viewing the error file for the plotting step with the Cylc GUI, I would suggest viewing the error file at the command line. It will be in a subdirectory of
~/cylc-run/u-co635/log/job/1/make_plots/ .
You can use more or vi or emacs or maybe another editor to view the error log files.
More than half the time I do study the stderr and stdout files at the command line instead of in the Cylc GUI. I would recommend looking at the other files in that subdirectory too, not just the job.err file.
Patrick

Hi Martin:
Did you figure out what is wrong with your make_plots app yet? Did you get it to run successfully?
Patrick

I’m still looking into it. There wasn’t anything discernable from the log files so I’m currently waiting to make sure all the individual sites have been completed before testing again. I will post an update hopefully later…

Do all the JULES runs for the individual sites show up as a green, completed color in the Cylc GUI? That’s a good sign that they all completed.

Also, if you switch the make_plots to waiting, then it should automatically figure out if all the JULES jobs are finished or not, and it would start running if all of them are indeed finished.

Hi again, Martin:
And if you give us read permission to your home directory and subdirectories, I could take a look at your setup and log files. You can do this with:
chmod -R g+rX /home/users/mdekauwe/

If you have anything private or confidential, you might want to change back the read access on those items.
Patrick

Yep done, there is nothing that exciting in there!

Hi Martin:
Thanks for the permissions change.

I then did this, to see which of your jules jobs did not have the ‘succeeded’ string in their job.out file:
grep -L succeeded ~mdekauwe/cylc-run/u-co635/log/job/1/jules*/*/job.out

This suggests that it ran out of wall clock time.

I ran this suite recently without an issue, so maybe it picked some node where there were problems or something. But if you still have problems after retriggering in a 3rd try, you might increase the wall clock limit from 2 hours to say 5 hours and then rerun those sites.

You can do this by editing the file:
/home/users/mdekauwe/roses/u-co635/site/suite.rc.CEDA_JASMIN so that it says 5 hours instead of 2 hours:

And then after the editing is finished, you can do a rose suite-run --reload at the command line, followed by manually retriggering the JULES runs for failed sites in the Cylc GUI.

Let me know if this helps or not,
Patrick

OK had another go. The sites have definitely all finished, but I’m still getting the plot error. I’ve tried retriggering it but that hasn’t worked. I also increased the runtime as suggested. The error message isn’t very insightful:

I would suggest making a new copy of this suite and rerunning from scratch. This way you have a copy of the original configuration and more tracing can be done later to figure out what went wrong:

The alternative to this is to just do:

Another thing that you might try is to try running the make_plots job script at the command line:

You might look at this script with your editor prior to running it, and maybe you might want to make simple changes to it. You can kill this script with control-Z and kill %. It’s a little easier to debug this way maybe, than it is to run from the Cylc GUI.